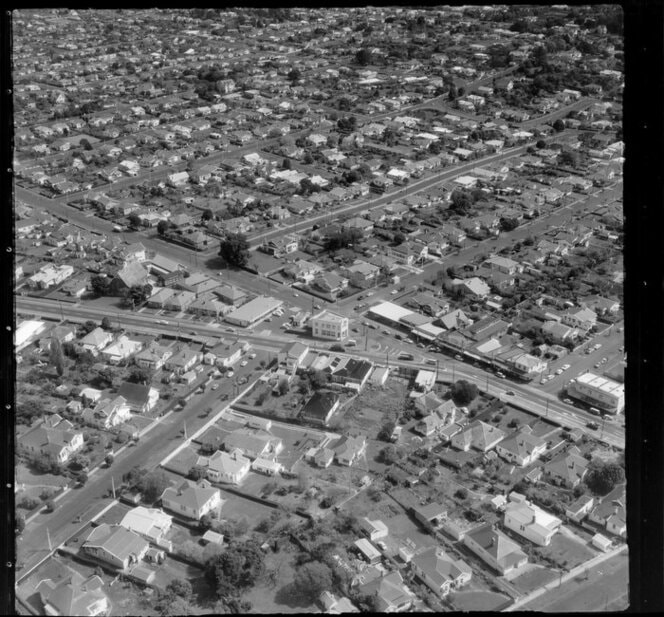 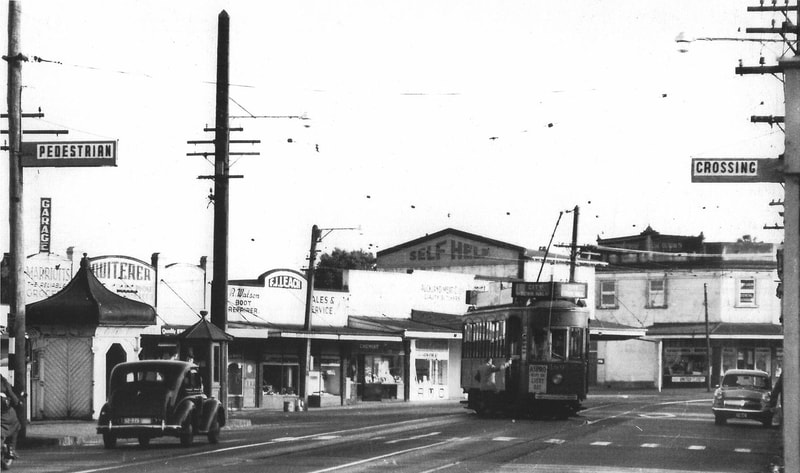 Showing a tram transiting along the intersection of Manukau and Pah Roads at Greenwoods Corner with an oriental-style tram shelter and telephone booth in the foreground. Date: 1956. Credit: creator Graham Stewart MNZM. 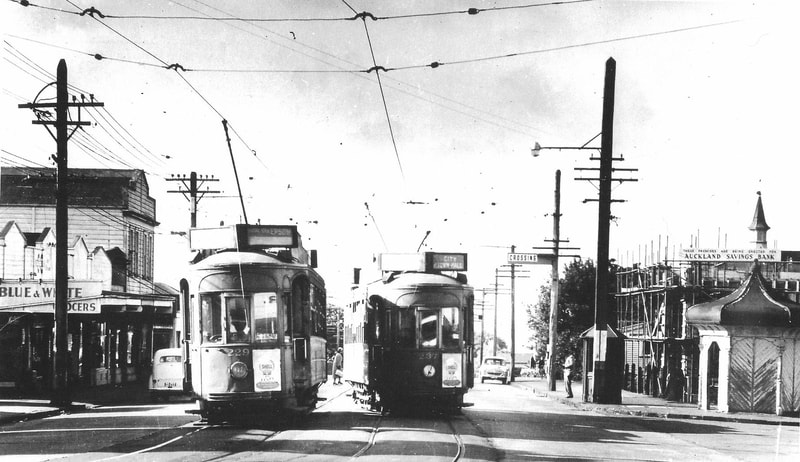 Showing the construction of the Auckland Savings Bank (ASB) at Greenwoods Corner to the rear of an oriental-style tram shelter with trams transiting along Manukau Road. Date: 1956. Credit: creator Graham Stewart MNZM. 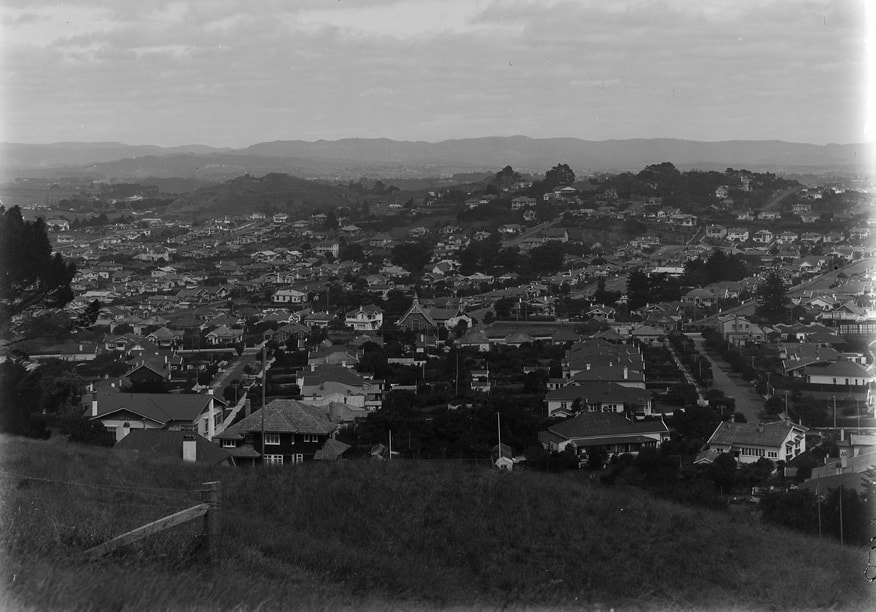 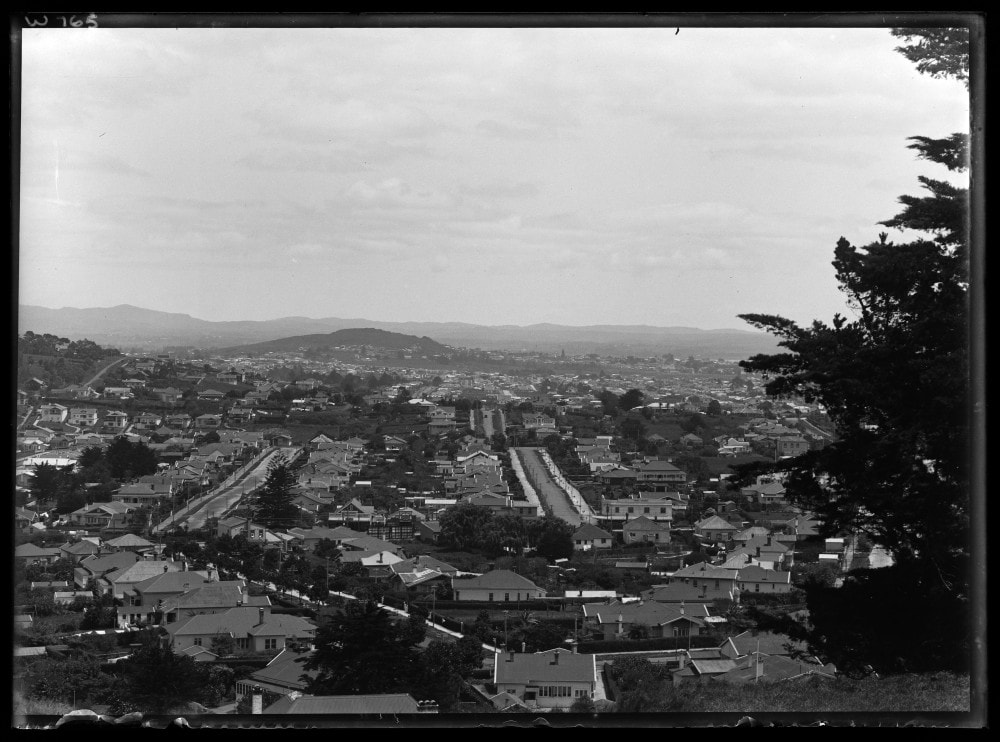 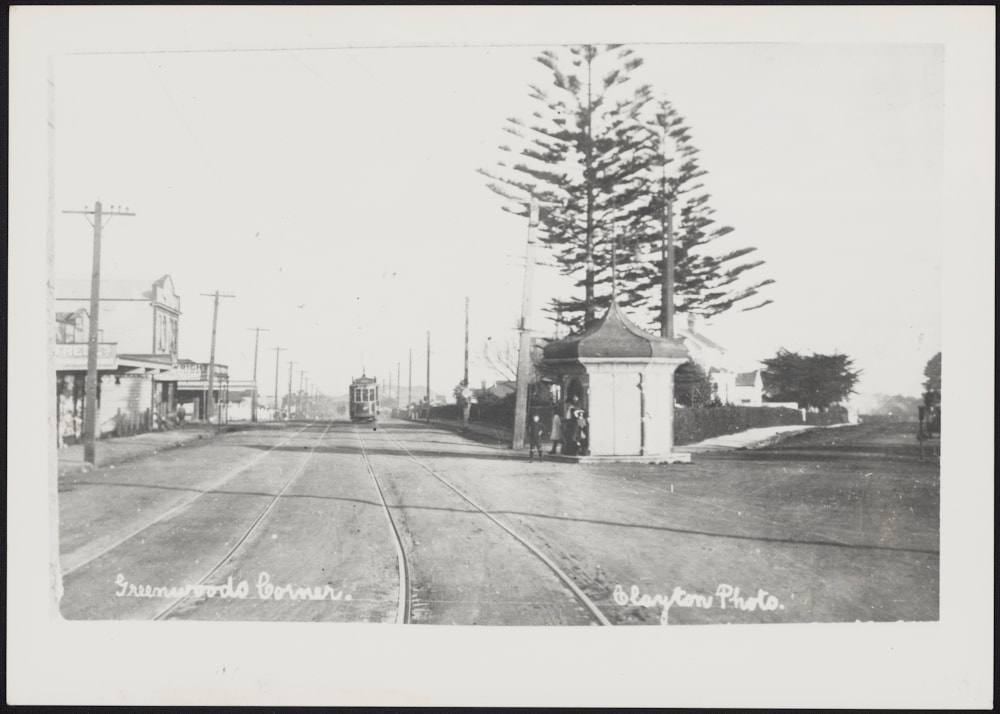 Philip’s father, Gilbert Hawken, was the son of William Hawken who died aged 83 in 1879 in Whangarei.  William, with his wife Phillippa and nine children, had come from Pelyunt, near Liskeard, Cornwall to the Whau Whau Valley, Whangarei in 1859.

Gilbert and his wife Agnes Kate Jenkins were married in 1875 and only son Philip was the last of their five children. The family had moved to Epsom, Auckland, and lived at Boscoppa, 16 Ranfurly Road. (Boscoppa, Cornwall, was Gilbert’s birthplace.)

Born in 1894, Philip Henry Hawken enlisted as a corporal in the New Zealand Rifle Brigade H Company and embarked in April 1917 on the Pakeha which left Wellington for Plymouth, England. Before enlisting, he had already passed several pharmacy examinations, serving his apprenticeship withAlexander Eccles, a well-known chemist in Auckland city.

Philip fought at the Battle of Passchendaele, also known as the Third Battle of Ypres. The capture of the Belgian village, near Ypres in West Flanders, became an objective that cost the lives of thousands of New Zealanders in 1917 and has become a by-word for the horrors of the Great War. Although Philip survived, in April 1918, he was reported as in hospital, but not in a serious condition. The family story
goes that he suffered a shrapnel wound between the first and second fingers of his hand and the medical team decided that the fingers should be amputated. Philip reckoned that his occupation as a chemist would be so compromised by the operation that he discharged himself, disappeared for a time and was cared for by Belgian peasants until returning to his regiment. No questions were asked in the
chaos of that fearful time.

There are other stories, too, of his travelling by troopship, when each man was assigned a hammock. Philip was well over 6 feet tall and found it difficult to make himself comfortable in such a constrained position. After lights-out, he would stretch himself out on the mess table and sleep there in relative ease.

He stood firmly against the evils of gambling, not only as a result of his Methodist background, but also because he thought it unfair that by the end of the troopship’s voyage back to New Zealand, one or two men had stripped most of the servicemen of their hard-earned money in games of chance.

Returning to New Zealand he completed his qualifications as a chemist in 1919. He married Clematis Morton Bell in 1921, and in that same year established a business at Greenwoods Corner, Epsom as the local chemist and druggist, serving that growing community and living for many years at what is now 135 The Drive, from where he could walk to his pharmacy.

Initially his small shop at 569 Manukau Road was set up with capital borrowed from his mother, but business prospered. He bought the vacant section next door and expanded, installing expensive light oak fittings and a distinctive, blue-tiled exterior, creating a very modern and well-lit space. Remembered as a tall, upright man with a military bearing, he ‘dispensed medicines as well as providing helpful advice
on numerous minor ailments’. In 1926 he was elected to the executive of the Northern Pharmaceutical Association.
​
Three children were born to Clematis and Philip, Ada Bell (born just ten years after her aunt Ada, a Kiwi nurse, who died of typhoid in Alexandria, in October 1915), Graeme Gilbert and Denis Renton. Denis

(Toby) Hawken started work as a chemist with his father in 1951 and took over the business when Philip retired in 1965, after 44 years at Greenwoods Corner.

Philip Hawken died in 1986 and Clematis in 1997. The shop that was identified as ‘P H Hawken Chemist’, has now become ‘Simply Wonderful Clothes’, featuring fashion for women and there is no longer a chemist and druggist at Greenwoods Corner.